Data update: Destroyed by freezing does not equal alive

In the experiments reported in the present paper a number of active agents, some undoubtedly living, others equally unquestionably not living, and still others of a doubtful nature, were subjected to repeated freezing (-185°C.) and thawing. By these tests it has been possible to determine that mere destruction or inactivation of a substance cannot be accepted as proof that it existed in a living state.

In 1926, legendary virologist / bacteriologist Thomas M. Rivers addressed the still-extant question “Are viruses alive?” through the simple experimental method of freezing them over and over. The paper in question came out in the Rockefeller Institute house publication Journal of Experimental Medicine (vol.45[1]: pp. 11-21). Not exactly a gripping title.

What kind of data is in here? Well, for most of the graphs they take an “active agent” (either bacteria, virus, or enzyme), freeze-thaw it “as often as desired”, and then see if it’s still active. The data is pretty straightforward, with a separate section for colon bacilli, a section for Virus III, a section for “a bacteriophage lytic in colon bacilli”, and so on. But it’s never summarized in a way that compares the different “agents” to each other. Let’s try to do that.

The low temperature (-185°C.) used in the experiments to be reported was obtained by means of commercial liquid air which was transported from the plant to the laboratory in Dewar flasks. Desired amounts of the air were transferred to deep Dewar beakers where small amounts of the substances to be frozen, enclosed in Noguchi tubes, were completely immersed for several minutes. After the substances had been completely frozen they were quickly thawed in tap water (16-18°C.).

What does “active” mean for these various substances? How did they determine that freeze-thawing had destroyed the substance’s activity? This was different for each substance. 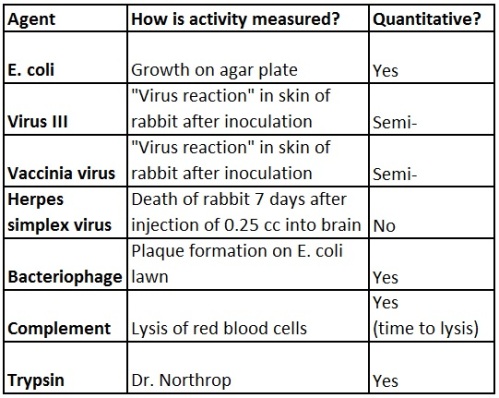 Bacteria can be measured the same way we measure them now, by making serial dilutions and plating each dilution on agar, then seeing how many colonies grow. Bacteriophage can be measured the same way, by first making a “lawn” (agar plate fully covered with bacteria) and applying different dilutions of bacteriophage, then seeing how many “plaques” (holes in the lawn) are formed by the phage killing the bacteria.

Complement can be measured by seeing how long it takes to destroy “given amounts of red blood cells in the presence of a great deal of amboceptor“.

Trypsin can be measured somehow, Dr. Rivers doesn’t specify except by saying that his colleague Dr. Northrop took care of that part of the study. Nowadays Dr. Northrop would be a co-author. But the paper would then have to list Rivers as both the first author and the last author somehow, since Northrop didn’t do enough to merit either status.

Anyway, to find “details of the technic” we are directed to a paper by Northrop and Hussey (1923), showing a very clever method by which a solution of gelatin is exposed to trypsin, and at different timepoints the gelatin’s viscosity is measured. 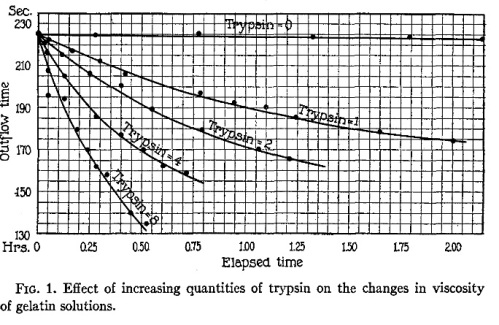 And how do you measure viscosity? With a viscosimeter.

I’m having trouble understanding sentences like “The gelatin-water time ratio was approximately 3”, but the point is that you can measure the amount of trypsin by measuring how fast it turns gelatin into runny gelatin. Nowadays you would use a colorimetric assay, in which trypsin cuts the protein that has some sort of colored label attached to it, and you would measure how much colored label gets released into solution.

“Vaccine virus” and “Virus III” are both introduced to the skin of rabbits, probably by scarifying and then rubbing the virus into the scratches. They look for a “virus reaction” in the skin surrounding where the virus was inoculated, and measure this semi-quantitatively based on how bad of a sore forms. I hope they aren’t simply measuring the immune response to the inoculation, because even killed virus should produce some immune response.

All stocks of Virus III were lost some time before the invention of electron microscopy. Nobody can now be sure what exactly this rabbit-specific virus was, but it was probably Leporid herpesvirus 2, as described by Nesburn in 1969. For an objective summary of the Virus III story, read the page on LHV-2 (p. 380) in The Laboratory Rabbit, Guinea Pig, Hamster, and Other Rodents (Academic Press, 2012).

“Herpes virus” (Herpes simplex) activity is measured differently. They inject HSV into rabbit brains, and they look for dead rabbits. It seems like this assay should actually be quantitative, based on looking at how long it takes the rabbits to die, but all their rabbits either died within a week or lived longer than a month, so the results were clear without measuring time to death.

The results are pretty simple, which is why I would like a summary figure instead of a series of tiny individual tables for each thing they studied. 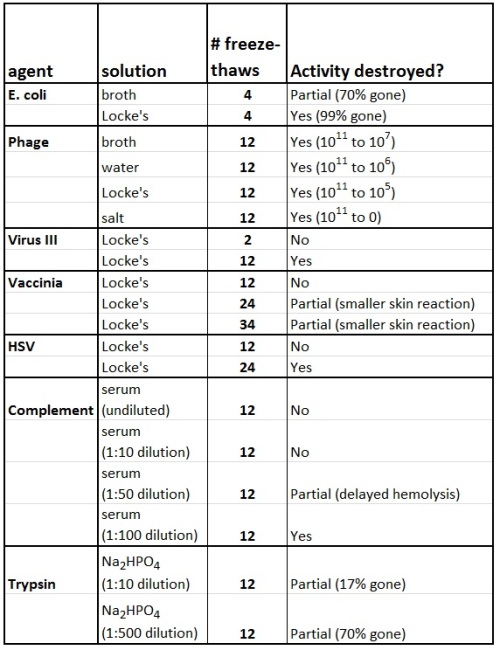 Some comments on the data: